Tomorrow is Mother’s Day and I’m certain I’ll be seeing post after post on social media about how “I have the best mom”. I don’t doubt people believe that.

I had a childhood that was filled with joyous occasions with my Mom. The innocence that comes from being a child is something I still envy. The fact is my childhood wasn’t perfect, but I only realized it when I look back now as an adult. The teenage years were in a word, “hell”, but I’m not getting into that. The quote, “there is no way to be a perfect mom, but a million ways to be a good one” always comes to mind for me. Not only because that is my motto as a mother, but also because it embodies my Mom.

The mother/daughter relationship I have now wasn’t always the case. There was a time when I truly believed I would have no relationship with her whatsoever. My Mom is an acoholic and I say that even though she hasn’t had a sip of alcohol in nearly 14 years. I say that because I’ve learned that even as you live a sober life and practice the program that helped you get there, you’ll always be an alcoholic. Even though we have a relationship that I’m sure some mothers/daughters envy, it could be broken so easily.

I won’t go into the ugliness of her story. I’m choosing to share the things I’ve learned from my Mom in the last 13.5 years.

Forgiveness- I learned to forgive. It took me over 8 years for me to finally have the knock on my head and the tug on my heart that taught me forgiveness isn’t for the person you’re forgiving. No, it’s for you. Anger and resentment truly are a weight on someone’s shoulders. It causes anguish that is so unnecessary. I remember the moment I realized I wanted to forgive her, but couldn’t. I also remember the tears when my heart finally allowed it. I can’t describe to you the freedom it brought to my life.

Empathy- I learned empathy. I really believe I was an empathetic person before, but maybe not as much as I could have been. I now see people who are struggling with an addiction and I picture every human being who loves/loved them and my heart truly breaks for them. I see them and I think every person has a story and even though their story is different than mine and they made decisions different than mine; they deserve respect, love and kindness just as much as anyone else.

Admiration- I admire the men and women who helped get my Mom to where she is today and there was a time I hated them. How naive and self centered was I? I just saw them as people who were getting in the way of me having my Mom back when in reality they were helping her get to a place where I could have my Mom back. After she had been sober for sometime I remember meeting people and them saying, “Oh your Mom is so great. She’s done so much for me.” In my head I rolled my eyes and gave these people the middle finger and responded by saying, “Really? She sucks at being a Mom to the daughter and son she carried and birthed, but I’m super glad she’s helping out complete strangers.” Looking back now I curse myself for having such thoughts.

God is Real- I always believed in God, only in the past few years have I developed a friendship with him, but what sparked it was a conversation with him about my Mom. He made it clear to me that he intervened there and I wasn’t supposed to spend the rest of my life bitter and angry with her. We all have a purpose and Mom’s was being fulfilled and I needed to see that, accept it and search for why I’m here.

Laughter is the Best Medicine- My Mom and I look back on experiences now and we laugh about them. So many things from childhood that truly stayed with me were times when she was drunk and I didn’t even realize until I was an adult. However, I can now mock her for dancing on a table in a white bath robe at a hotel, and performing Madonna’s “Like a Virgin” complete with finding skinned knees the next morning from humping the floor. In her defense, these are all things my Mom would probably do now, but it probably wouldn’t be quite so sloppy and I would happily do it right alongside her.

The last thing isn’t something she taught me, but something I treaure. My Mom wears many hats, but my favorite is Grandma. She loves my boys with a fire so strong it could engulf the world. Much to my dismay, she thinks everything they do is funny, adorable or necessary. Seeing her with them brings me great joy. The truth is that was almost denied to them and her. If my Mom had continued living the life she was, she probably wouldn’t be alive today. If she was alive and living that way, I would have no relationship with her and my boy’s would be missing out on the woman who kicks balls down the aisle at Target, tells poop stories with them and dances to the “tight pants” song. 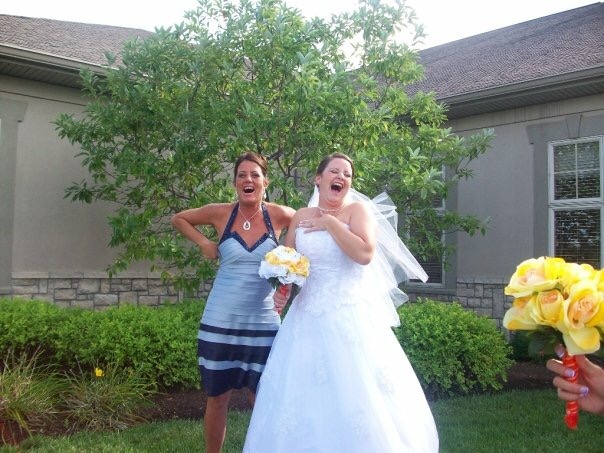 Mom and I on my wedding day!